As Canadians, we are truly a blessed nation. Not only do we live in a vast country with beautiful and varied landscapes, but we also have rights and liberties that are virtually unknown in many parts of the world. Freedom of speech, freedom to worship, freedom to protest, freedom to elect our government. Our people have contributed amazing things to the world including, but certainly not limited to: insulin, the light bulb, the artificial pacemaker, alkaline batteries, the Canada Arm and, of course, ice hockey. But all of these freedoms and creations may never have existed if not for the bravery of young Canadian men and women who have contributed their efforts and, far too often, their lives in order to give us the opportunity to grow and to flourish in this great country.

Two of our most treasured and recognizable symbols that recognize the hard fought battles and sacrifices of our war time heroes are the Canadian National War Memorial and, of course, the poppy. Here are a few details about each of these significant Canadian tributes. 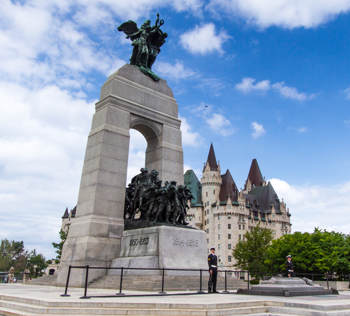 In Confederation Square in Ottawa stands our Canadian National War Memorial. Although it was originally erected to commemorate Canada’s sacrifices in the First World War (1914-1918), in 2014 it was rededicated and is now a symbol of honour to all Canadians that have served Canada during times of war.

In 1925, a competition was held to design and create the monument. The direction given was that it was to be “expressive of the feelings of the Canadian people as a whole, to the memory of those who participated in the Great War and lost their lives in the service of humanity”. The winning entry was by Vernon March, a British sculptor who died before the work was finished. His siblings completed the project and Canadian officials made changes to it so that the uniforms and equipment were authentically Canadian. There are 22 bronze figures emerging from the arch in the following order: infantrymen, a mounted cavalryman, a mounted artilleryman, an aviator, a sailor, a sapper, a forester, a stretcher-bearer and nurses. The two figures atop the monument symbolize freedom and peace. The granite archway was contracted to be built in 1937, after the final location was decided.

The Tomb of the Unknown Soldier was added to the Canadian National War Memorial in May of 2000 when the remains of an unidentified Canadian First World War soldier were brought home from France, from the Cabaret-Rouge war cemetery, which is located near Vimy Ridge, and interred in the tomb at the base of the memorial.

Tomb of the Unknown Soldier, covered in poppies. Image from The Canadian Encyclopedia.

Every Canadian is familiar with the bright red poppies that begin appearing on lapels and over our hearts in the days before Remembrance Day. The Royal Canadian Legion is the force behind this simple yet powerful reminder of our country’s brave history in times of war and the lives lost during those times. Please take the time to visit the Legion’s website at  http://www.legion.ca/remembrance to learn the full story of the history and meaning of wearing a poppy and the proper way to wear it with honour. You will also learn about how the proceeds from the sale of the poppies is used to support our vetrans and the Legion’s year-round efforts to encourage remembrance.

So on the 11th hour, of the 11th day, of the 11th month, let’s take a moment to remember and appreciate all those who have fought, and those that continue to fight, for the rights and freedoms that we as Canadians enjoy. Let’s recognize the very high price paid by those extremely brave men and women and let’s honour their memory.